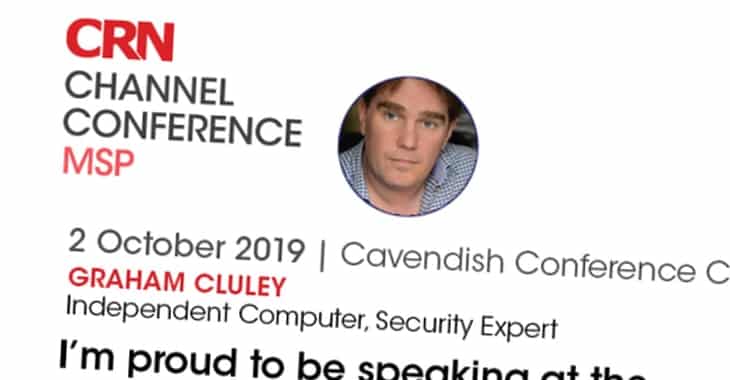 I’m the opening keynote speaker at CRN’s MSP conference in London next week, where – amongst other things – I’ll be describing to managed service providers how it’s possible to make a billion dollars through cybercrime.

Here is the blurb about my talk:

Every day we read headlines of data breaches, hacks, and malware attacks. Often they’re identikit newspaper stories where you could easily just change the names of the companies involved and the number of customer records they have had stolen from them.

But often lost is the truth of what *really* happened, and how a hack was pulled off, or how companies misled the public about a huge hack.

In his keynote, computer security veteran Graham Cluley will arm MSPs with a fresh perspective on how to position cybersecurity in the new era of mega-fines, detailing some of the strangest and most devastating attacks that have occurred along the way.

If you haven’t already made a billion dollars, or are just curious about how it can be done, and you’re going to be within reach of the Cavendish Conference Centre on 2 October 2019, you may want to check out further details about the conference and register for a ticket (it’s free to attend for senior executives from reseller organisations.)

I hope to see some of you there. And if you can’t make it to London be sure to check out other events on my speaking schedule over the coming months.