Four members of the notorious LulzSec hacking gang, who attacked websites belonging to the likes of the CIA, the NHS and the Serious Organised Crime Agency (SOCA), are due to be sentenced by a court in London today.

Jake Davis (aka “Topiary”), Ryan Cleary (“Viral”), Ryan Ackroyd (“Kayla”) and Mustafa Al-Bassam (“T-Flow”) could face tough jail sentences for a series of crimes, including not just denial-of-service attacks but also stealing the personal information of thousands of innocent people and posting it online.

As we wait to hear news from the court regarding sentencing of the Anonymous-affiliated group, at least some people are threatening to take revenge if they feel their hacking heroes have been given rough justice. 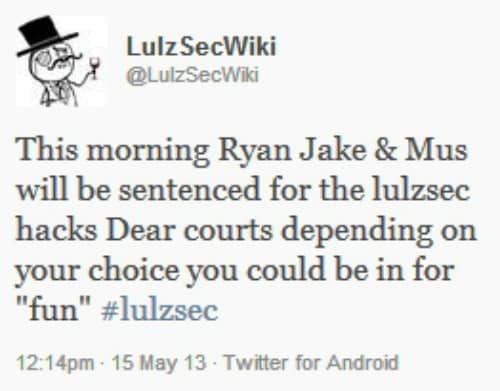 In the past, we have seen hackers launch internet attacks against law enforcement agencies and courts after a fellow hacker has been sentenced.

Let’s hope that nothing of that kind happens today. Certainly, if it were to occur it would be no surprise at all to see the authorities pursue those responsible with vigour.