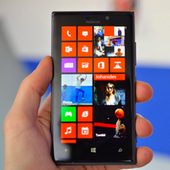 Although Google has released official versions of its smartphone apps for the iOS and (obviously) Android platform, Microsoft’s Windows Phone has been largely ignored.

The truth is that Windows Phone has a pretty pitiful marketshare compared to its big Google and Apple competitors, and so there’s not really any good reason why Google feels it should give Microsoft a helping hand in making its platform more attractive by releasing its apps.

It’s a real problem for Microsoft and the Windows Phone. Developers won’t create apps for the platform until they are confident that there is a decent sized market for them. But more people won’t buy a Windows Phone until there are a decent number of quality apps.

For app developers like Google, who have a healthy interest in promoting a rival platform (and putting down a potential competitor), the decision seems pretty clear cut at the moment. And that’s why they’ve only released their Google Search app for the Windows Phone operating system.

With that in mind, eyebrows must have been raised when versions of Google Hangouts, Google Maps, Gmail, Google Plus, and other seemingly official apps from Google, appeared in the Windows Phone store at a cost of $1.99 each. 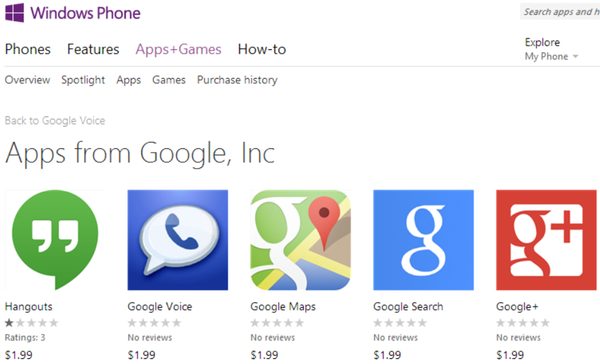 At first glance, Windows Phone owners might think that these apps were the real thing. But in reality they’re fake.

The apps, which were discovered by WinBeta, noted that the real legitimate official (and free) version of Google Search in the Windows Phone store lists its developer name as

Clearly the intention here is to trick Windows Phone users into believing they are purchasing a genuine app from Google, and put money into the pockets of fraudsters.

Thankfully, the media attention resulted in Microsoft withdrawing the apps from the Windows Phone marketplace. But questions have to be asked as to why Microsoft wasn’t able to spot the suspicious apps appearing in its app store ecosystem in the first place, especially when they claimed to come from a company as big as Google.

Was a simple comma inserted into the developer’s name enough to dupe Microsoft?

Microsoft gave a statement to The Next Web, pushing the responsibility of policing the app store clearly onto the community and the developers themselves:

Microsoft provides online tools and an email alias ([email protected]) to enable developers to quickly report infringement of any apps they locate on the Windows Phone Store for immediate review and, when appropriate, removal. In cases where the infringement is disputed, we permit alleged infringers to dispute infringement via counter notices. Finally, Windows Phone educates every developer from the very start – before apps are even submitted – reminding them in our developer agreements and policies that Microsoft does not permit infringement of intellectual property of others.

In short, Microsoft says it’s not going to proactively police the Windows Phone store. Tough luck Windows Phone users if you pay for dodgy apps that pretend to be from a legitimate developer.

Android is sometimes called “the new Windows” because of it’s dominant marketshare, availability on multiple devices from a wide variety of manufacturers, and – alas – the large amount of malware written for the platform.

Let’s hope that Microsoft gets more serious about stopping Windows Phone becoming the new Android, from the poorly-vetted apps point of view at least.

Graham Cluley is a veteran of the anti-virus industry having worked for a number of security companies since the early 1990s when he wrote the first ever version of Dr Solomon's Anti-Virus Toolkit for Windows. Now an independent security analyst, he regularly makes media appearances and is an international public speaker on the topic of computer security, hackers, and online privacy. Follow him on Twitter at @gcluley, on Mastodon at @[email protected]n, or drop him an email.