Pages, set up by fraudsters, claim to belong to a well-known brand. In this case, it’s British Airways which is having its name tarnished by scammers trying to trick users into sharing a post and liking a Facebook page, with the lure of four first class tickets to anywhere in the world and a £2000 cash prize.

How would you like to fly First Class on BA Just share this post to enter. 1,000 people have got the chance of winning 4 first class tickets for anywhere in the world for a date of your choice along with £2,000 cash. Winners will be announced on 26th November. Like our page for updates. Message us for more details.

Just the kind of thing many people would probably be keen to win in time for the Christmas break.

However, although the Facebook page looks professional enough, it hasn’t been created by British Airways, and its flights aren’t so empty that the airline can afford to give away 4000 free tickets to anywhere in the world, on any date. 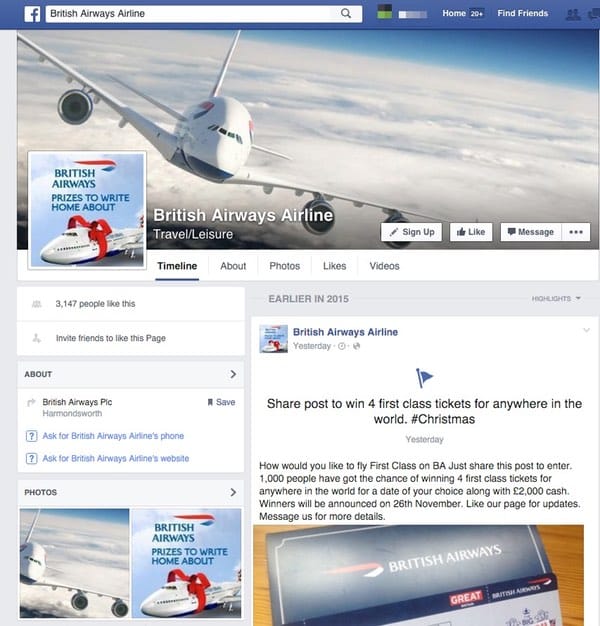 Thousands of Facebook users have liked the page, and shared the post, in the hope of winning a prize. But the only surprise they’re likely to get is when the scammers start to take advantage by posting spam messages, or tricking users into visiting third-party sites to take part in money-making surveys or spread malware.

Always think twice before believing what you read on Facebook. There continue to be many scammers operating up there.