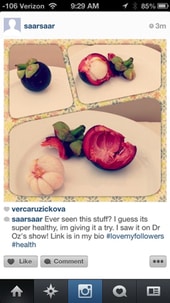 Have you received a message in the last few days from one of your friends, telling you that they have decided to take up a miracle diet after seeing it talked about on the Dr Oz TV show?

Following the wave of diet spam which caught the attention of security researchers on Twitter late last week, the attack appears to have most recently expanded to include Instagram where, as GigaOM reports, various fruity snapshots appeared and users were advised to reset their passwords.

Whether the social networking accounts which began to spew out the spam had been sloppy with their password security, or whether there was another reason for the accounts being compromised, is currently unclear. But what is very easy to see is that you would be very unwise to give money to people who clearly feel the need to use dirty tricks to dupe you into buying a product via their links.

I followed one of the links being distributed in the spam campaign to see what would happen. (By the way, I don’t recommend this for the man-in-the-street… It’s always possible that you could be taken to a malicious site designed to infect your computer).

So, I pulled on my aqualung and donned my protective marigold gloves, and dared to see what lies beneath the Garcinia Cambogia spam campaign.

Clicking on the link I found myself on what, at first site, appeared to be a BBC website. 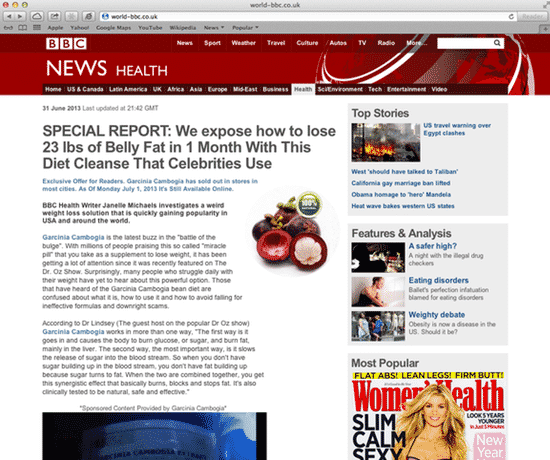 It certainly *looks* like the BBC News website, and all the links around the main content point to real bbc.co.uk/news webpages. But there’s something odd here.

SPECIAL REPORT: We expose how to lose 23 lbs of Belly Fat in 1 Month With This Diet Cleanse That Celebrities Use

Furthermore, it’s weird to see a YouTube clip of Dr Oz appear on a BBC website. After all, his show doesn’t appear on the BBC.

But, hey, it has the word “BBC” in the URL, so it has to be trustworthy – right? I scrolled down the news article, reading further. And the more I read, the more it didn’t sound like a traditional BBC News article.

For instance, this section: 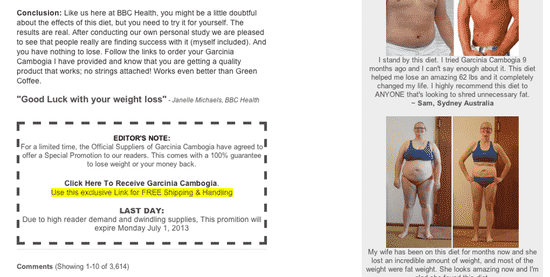 Conclusion: Like us here at BBC Health, you might be a little doubtful about the effects of this diet, but you need to try it for yourself. The results are real. After conducting our own personal study we are pleased to see that people really are finding success with it (myself included). And you have nothing to lose. Follow the links to order your Garcinia Cambogia I have provided and know that you are getting a quality product that works; no strings attached! Works even better than Green Coffee.

EDITOR’S NOTE:
For a limited time, the Official Suppliers of Garcinia Cambogia have agreed to offer a Special Promotion to our readers. This comes with a 100% guarantee to lose weight or your money back.
Click Here To Receive Garcinia Cambogia.
Use this exclusive Link for FREE Shipping & Handling

LAST DAY:
Due to high reader demand and dwindling supplies, This promition will expire Monday July 1, 2013

Umm.. so much for the BBC’s impartiality! I don’t remember the BBC ever offering exclusive links to promote a particular product so their readers can benefit from savings. This is beginning to sound suspiciously like an advert rather than a news report.

So, let’s take a look at the HTML source code behind this “BBC” website.

It appears that world-bbc.co.uk is just a few lines of code, containing a simple iFrame which pulls in web content from a third-party website (which – funnily enough – appears to have a name inspired by the AltaVista search engine of old). Is the real BBC website likely to be shovelling its “news” content from there?

Of course, many people won’t care to look so carefully, and might be vulnerable to buying miracle diets off the web based upon bogus endorsements by the BBC or spam messages from their social network.

The spammers are counting on just a small percentage of visitors being tempted to buy their product, or make a rash decision because of the strong-arm tactics and warnings that the special offer won’t be around for long. And it will be the spammers who will be getting fat from the affiliate cash they could earn.

The hard sell continues even when you attempt to close the browser window. 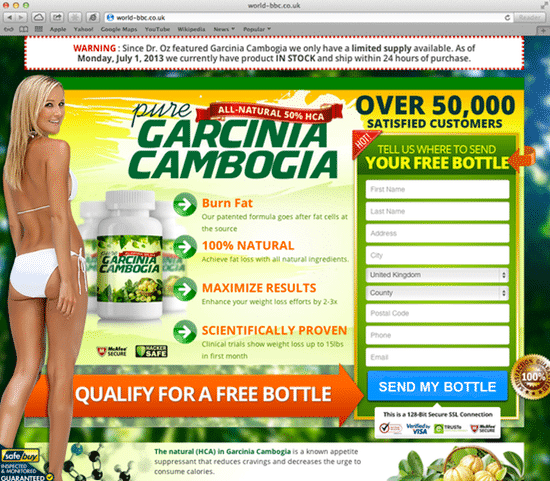 If you want to be healthier, and need to lose weight, go to your doctor for sensible advice. Don’t trust everything you read on the internet, even if it at first the advice appears to be shared with you by your social networking friends or by the BBC.