Here’s a bit of fun.

Some wags have created what they call a “realistic Facebook security simulator”. With just 20 seconds until Facebook rolls out new privacy settings, can you scramble to choose the safest options? 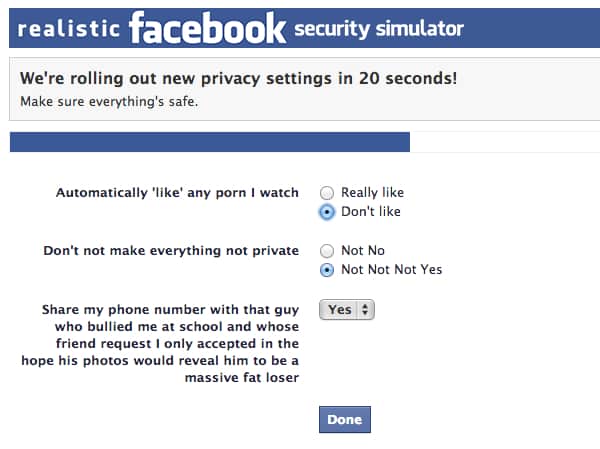 Okay, so they’re taking things to extremes. But in some ways this online game *does* simulate the feeling you often have on Facebook – crazy scrambling to change or re-check your privacy settings after the social network pulls the rug from underneath you.

Clearly UsVsThem, who developed the game, aren’t huge fans of how Facebook has introduced changes to its privacy settings over the years.

Some of the settings you are asked to check during the rapid-fire game are quite hilarious, including “Don’t not make everything not private”, “Notify partner’s ex when I put on weight”, and even options written in a foreign language (I haven’t seen Facebook try that one yet, but give them time..)