Social Fixer, formerly known as Better Facebook, is a tool that over half a million Facebook members use to enhance the look, feel and functionality of the world’s most popular social network.

The tool, available as a free download for a variety of popular web browsers, lets you configure a number of aspects of figure.

For instance, Social Fixer can offer tabbed news feeds, hiding posts you have already read, enlarging pictures just by hovering over them, highlighting new comments and much much more. 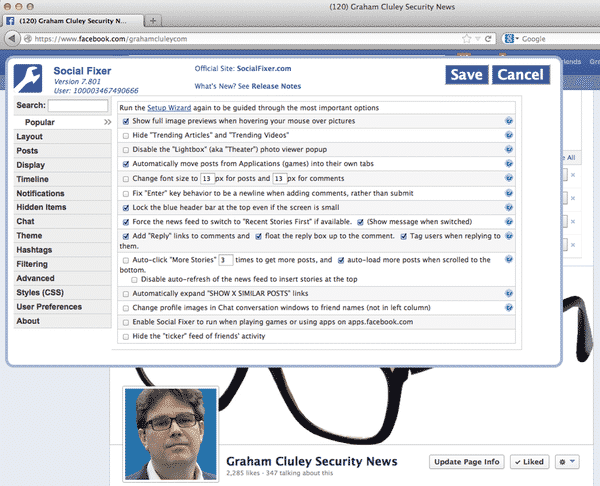 Sure, developer Matt Kruse would appreciate it if people who found the add-on useful supported him by sending through a PayPal donation or clicking on one of the Google Ads on his website, but you get the feeling that Social Fixer is a labour of love rather than anything approaching a commercial venture.

But, for reasons unexplained, Facebook has wiped out four years of Kruse’s work on Social Fixer by deleting the tool’s Facebook page. 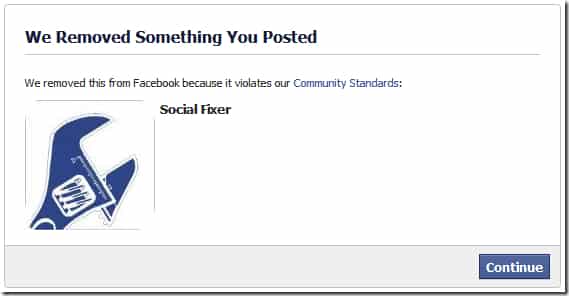 In Kruse’s own words:

I’ve spent 4 years and countless hours building up a community around my software: my Page had 338,050 Likes, my Support Group had 13,360 members, and my Interest List had 1.47 Million followers. But all of that work was wiped out in an instant when Facebook decided to shut it down without notice.

I have never been given any details about what “community standards” I was apparently violating (because I wasn’t). This is a case of Facebook choosing to shut down someone’s business just because they want to, not because they were doing anything wrong. This is extremely frustrating and disappointing to me, and should be to others as well.

Kruse goes on to say that he has never spammed his followers or used underhand means to boost engagement on the social network.

Sure enough, there seem to be plenty of Social Fixer users who are upset about Facebook’s decision, and making their opinions heard. 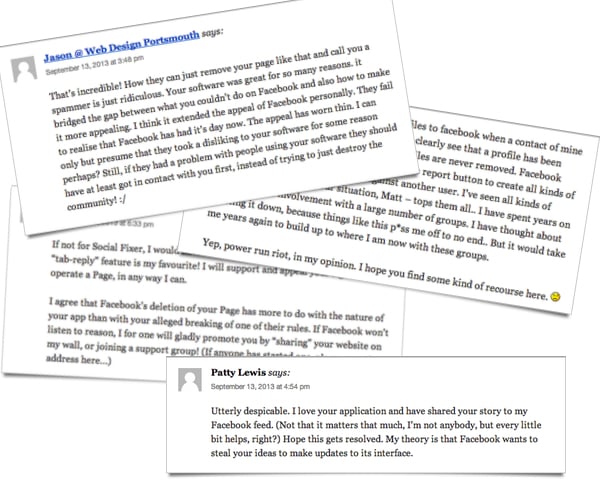 Interestingly, this isn’t the first time that Social Fixer has caught the attention of Facebook.

According to an article published by Ars Technica on August 25th (before the tool’s Facebook page was removed from the site), lawyers from the social network contacted Kruse a couple of years ago to ask that he change rechristen the addon that was at the time named “Better Facebook”.

Kruse obliged, and was even invited to a job interview at Facebook (he didn’t end up working for the company). 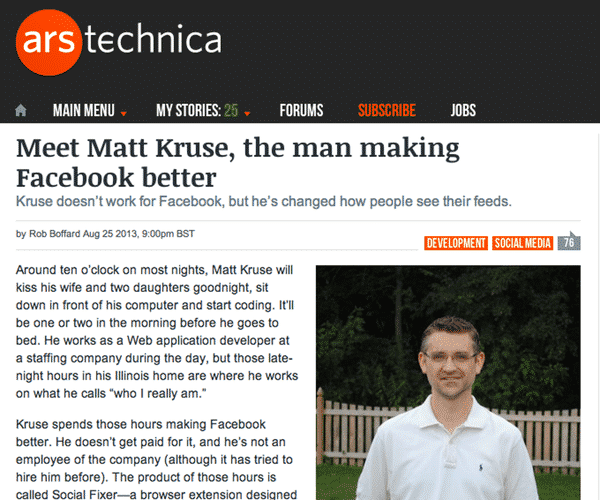 Could it be that this Ars Technica profile of Matt Kruse and his Social Fixer addon is what resulted in Facebook flushing his page down the lavatory?

It seems plausible to me.

Take a look at this section of the Ars Technica article, that compares Kruse’s addon’s success with the problems faced by a similar tool – FB Purity.

Steve Fernandez, a British programmer, created FB Purity in 2009; like Kruse, he’d become frustrated at not being able to see what he wanted on Facebook’s homepage. But unlike its kid-gloves treatment of Kruse, Facebook got serious. Fernandez says that although initially it just asked him to remove its trademark from his program name, it then “decided to block my domain name from being shared on the Facebook site, to try and limit the spread of the app.” It led to a protracted fight between Fernandez and Facebook, which, he says, has led to his account being disabled and confrontations with the site’s legal team.

“As I am sure you are aware,” one of their lawyers wrote in an e-mail to Fernandez, “Facebook’s Statement of Rights and Responsibilities prohibits integrations that impair the proper working or appearance of Facebook, including those that interfere with page rendering… Your extension was reported as interfering with and/or impairing site functionality and page rendering and links to your site have been blocked.”

When asked why it gave Social Fixer a pass and not FB Purity, Facebook’s press officer Jillian Stepanki declined to comment.

Sure enough – if you check out Facebook’s legalese you will find that messing with how Facebook looks is a big no-no.

Many might consider that tools like Social Fixer improve the appearance of Facebook, but it’s the site that decides if its “proper working or appearance” has been interfered with.

You have to feel sorry for Matt Kruse, because of the huge amount of work he must have put into his Social Fixer addon over the years, and the large community he managed to build up on Facebook. Furthermore, there are plenty of examples of hateful and offensive content on Facebook which is causing a lot more offence and upset than Social Fixer ever has, but seems to escape the site’s attention.

Kruse trying to rally his supporters into action, hoping that Facebook will reverse its decision if enough people will complain.

Maybe Facebook will change its mind, maybe it won’t.

But all users need to remember that Facebook is not a democracy, it can do whatever it likes, and decide its own rules.

From the moment you first created an account there, you put yourself at the mercy of Facebook and have to keep your fingers crossed that they’ll treat you sympathetically.

If you are on Facebook, and want to be kept updated with news about security and privacy risks, and tips on how to protect yourself online, join the Graham Cluley Security News Facebook page. (At the time of writing, my Facebook page hadn’t been deleted)

3 comments on “Fury as Facebook erases Social Fixer’s page (with 340,000 fans) without explanation”