After a receiving a U.S. intelligence assessment on Russian’s interference in last year’s elections, President Donald Trump vowed that he would have a team present him with a review of America’s cybersecurity efforts within 90 days of taking office.

But Thursday was the 90-day mark and no plan has been presented. The missed target date, one of several blown deadlines in the administration’s first months, has resulted in uncertainty as to who is running the cyber review and when it might be completed. The White House insisted Thursday that a plan was in the works but did not offer any timetable.

“The president has appointed a diverse set of executives with both government and private sector expertise who are currently working to deliver an initial cybersecurity plan through a joint effort between the National Security Council and the Office of American Innovation,” said spokeswoman Lindsey Walters.

She did not address why the deadline was missed.

The 90-days deadline was one of Trump’s own making, saying on January 6th of the need to “aggressively combat and stop cyberattacks”. Oh, and he couldn’t resist saying that the Republicans’ computer systems were much defended than the Democrats’, so nyeaahhh nyeaah! 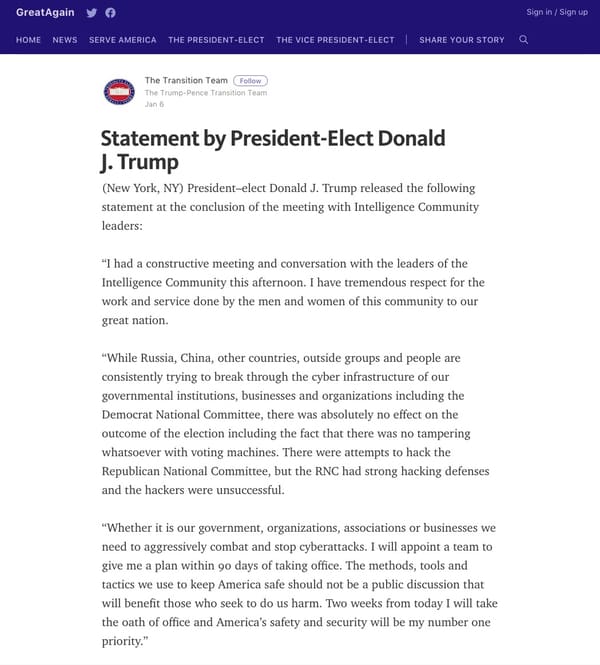 “While Russia, China, other countries, outside groups and people are consistently trying to break through the cyber infrastructure of our governmental institutions, businesses and organizations including the Democrat National Committee, there was absolutely no effect on the outcome of the election including the fact that there was no tampering whatsoever with voting machines. There were attempts to hack the Republican National Committee, but the RNC had strong hacking defenses and the hackers were unsuccessful.

“Whether it is our government, organizations, associations or businesses we need to aggressively combat and stop cyberattacks. I will appoint a team to give me a plan within 90 days of taking office. The methods, tools and tactics we use to keep America safe should not be a public discussion that will benefit those who seek to do us harm. Two weeks from today I will take the oath of office and America’s safety and security will be my number one priority.”

A week later, Trump returned to the topic of a cybersecurity review within 90 days on Twitter: It now turns out that the phony allegations against me were put together by my political opponents and a failed spy afraid of being sued. Totally made up facts by sleazebag political operatives, both Democrats and Republicans – FAKE NEWS! Russia says nothing exists. Probably released by “Intelligence” even knowing there is no proof, and never will be. My people will have a full report on hacking within 90 days! Readers may recall that days before his inauguration as US President, Donald Trump announced that Rudy Giuliani would be heading-up his cybersecurity team. Within a matter of hours, security researchers found a number of fundamental security problems with the website of Giuliani Partners, “an international security consulting firm.”

As you’ve probably guessed, Rudy Giuliani is the chairman and CEO of Giuliani Partners.

However, as AP points out, Giuliani does not seem to be involved in Trump’s cybersecurity review, so the blame can’t lie with him for its late delivery.

Of course, that does raise the question of exactly who is in charge of the cybersecurity review.

If Politico is to be believed, no-one is quite sure…

Answers on a postcard, please. It’s safer than email these days.