As has been widely reported in the UK press, “several hundred thousand” UK broadband users found themselves unable to connect to the net yesterday.

What did they have in common? They were all customers of BT. 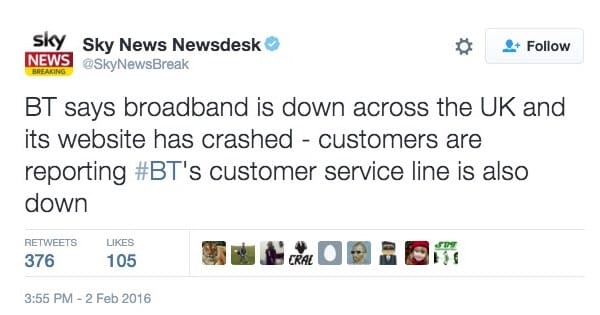 Inevitably in the current climate, some speculated that the outage might be due to some devastating attack by cyber-baddies. But the truth according to BT was rather more mundane: a failure in a single router.

Not that that down-to-earth explanation will have been much comfort to those who couldn’t access their email, or the companies who rely upon cloud-based services to do a decent day’s work.

Things have reportedly settled down now, and the network returned to normal operation. Anyone who is still experiencing problems is advised to try restarting their router.

But there remains a big question, which I’ve seen from readers of this site and on social media.

Should a company as big as BT, with all of its resources, really have such a critical single point of failure?

If one faulty router took down 100's of thousands of @BTCare broadband customers then their network architects are IDIOTS! #BTdown

Even if we believe BT that a faulty router was to blame, why it did take so long for the issue to be resolved? Why wasn’t it replaced sooner with a failover device or its configuration rolled-back to a known working state? Something went badly wrong, and customers expect higher level of professionalism.

One thing that is clear is that if you run a business which uses upon cloud-based services, wherever possible consider if you have alternative ways to access that data if your internet connectivity takes a nose-dive. For modern businesses to be unable to access the net is bad enough, but things will be only worse if it’s the only route to the data which can keep your business ticking over.

On a side note, I was curious to see what BT was saying about its downtime.

So, I did the obvious thing and checked out @BT on Twitter. 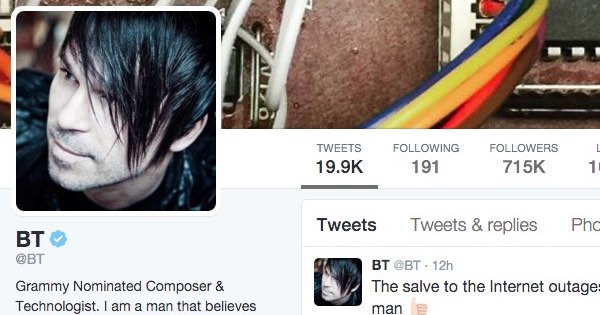 Oh, hang on – don’t be fooled by that “verified” icon. @BT isn’t British Telecom, it’s composer and technologist “BT” with an impressive 715,000+ followers. He also owns facebook.com/BT which must be galling for the telecoms company. They have an egg avatar and a puny 633 followers. They also seem to be mostly grumbling about the shonkiness of British Telecom.

Okay, well how about @BritishTeleco? 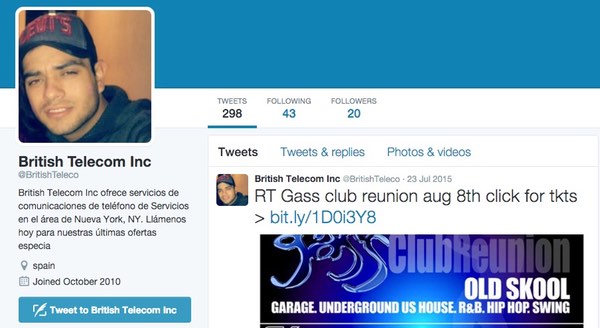 Nope, he’s some Spanish guy (who claims his name is “British Telecom Inc”). A little odd, but then who am I to judge when it comes to weird surnames…

It certainly took a while to find @BTCare, the official support Twitter account of British Telecom, with a measly 104,000 followers. 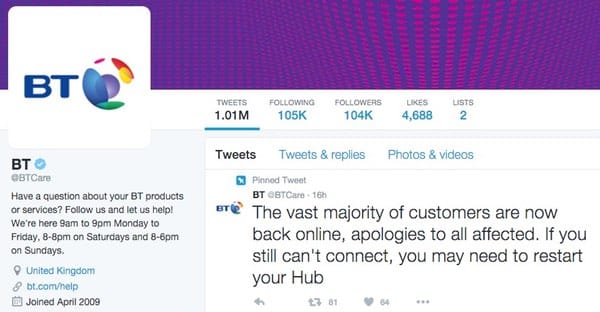 Perhaps they should become composers and technologists if they wish to boost their popularity.

I certainly found it odd that Twitter hadn’t tried to clean up some of these clearly misleading accounts as a service to its UK-based users. But then, perhaps the marketing department at British Telecom has never considered it a priority and pushed for action.

Or maybe they did think it was important, but every time they went to drop an email to Twitter HQ their broadband had a hiccup…

3 comments on “Did one faulty router bring down BT’s network? That’s not good”