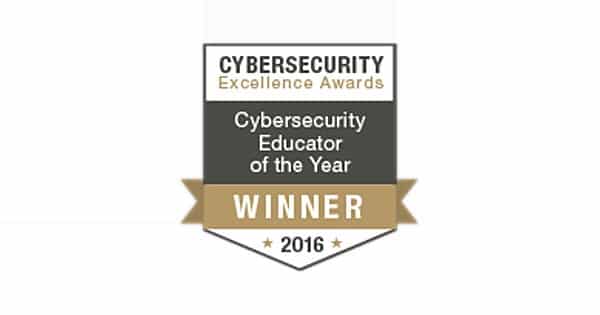 Thanks to everyone who voted in the recent Cybersecurity Excellence Awards.

I’m really honoured to have won an award for Cybersecurity Educator of the Year in Europe, Middle East and Africa – but that was only possible because so many people made the effort to vote and said some incredibly kind things about me.

It’s incredibly humbling and encouraging to get feedback – especially when it has something nice to say!

You can read more about other worthy finalists and winners in the Cybersecurity Excellence Awards by visiting the awards website.

Of course, this site isn’t a solo project – I’m ably assisted by a great team of other contributors who are just as dedicated to sharing advice and opinion about online safety and privacy.

Without their help, and the contributions made by readers who leave comments, this website wouldn’t be half what it is today.

Finally, I need to say a word of thanks to the site’s sponsors (Peerlyst this week – thanks guys!) who help support its running costs, and Incapsula who have provided protection against DDoS attacks in recent months.

Since we did away with online ads (hoorah!) at the start of 2015 and moved to a sponsorship model we haven’t had an empty booking, and I suspect that you as readers have appreciated it too.

Anyway, enough of the awards chit-chat. It’s back to business… we’ve got security news, opinion and advice to share!

5 comments on “Cybersecurity Educator of the Year”