The most common passwords revealed in the notorious Ashley Madison hack are generally consistent with non-cheating users’ weak password security.

Last week, a password-cracking group known as CynoSure Prime published a blog post in which it revealed that it had successfully cracked 11.2 million Ashley Madison’s users’ passwords and that it could break an additional 4 million.

The group explains that it was able to crack the bcrypt hashes used to protect the users’ passwords via a roundabout method: attacking Ashley Madison’s insecure implementation of the MD5 cryptographic hash function, which included the storing of passwords within the hashes themselves.

Keith Collins of Quartz has since had an opportunity to examine the work of CynoSure Prime. 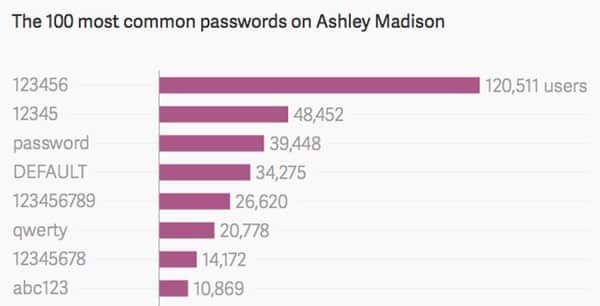 These leaked passwords are for the most part consistent with SplashData’s list of the most common passwords for 2014.

According to an article published by the Wall Street Journal, those passwords have been in preferred circulation among users for the past couple of years despite the growing number of high-profile hacks and data breaches.

Given the persistence of these permutations, it would appear that online users, including those wishing to pursue an affair, have been putting themselves at risk for years by continuing to choose weak, easily guessable passwords.

“Psswords based on simple patterns on your keyboard remain popular despite how weak they are,” Morgan Slain, CEO of SplashData, told PRWeb. “Any password using numbers alone should be avoided, especially sequences. As more websites require stronger passwords or combinations of letters and numbers, longer keyboard patterns are becoming common passwords, and they are still not secure.”

Given the nature in which threats are evolving in today’s insecure world, it would behoove users to consider using a Password Manager such as LastPass, 1Password, KeePass or Dashlane that can automatically generate and remember strong passwords for their online accounts.