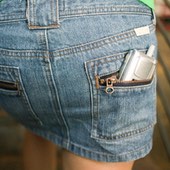 A butt dial – not to be mixed up with a “booty call” (apparently that’s something else) – is when your phone accidentally calls someone you didn’t mean to, maybe because you sat on the phone in your back pocket.

According to a Bloomberg report, the issue of butt dialling has come to the fore after a federal appeals court in Cincinnati ruled somebody who calls somebody else by accident isn’t protected by a right to privacy.

In short, if you’re the butt dialler rather than the one who is butt dialled you are at risk.

The case came about because two board members of Cincinnati/Northern Kentucky International Airport were in Bologna, Italy, and they needed a restaurant reservation for dinner. Rather than do it themselves they called their chief executive’s assistant back in the United States.

After all, if you’re an important board member you can’t arrange your own food. You’re too important for that. You need someone to do it for you.

The executive assistant, Carol Spaw, duly made the reservation. But somehow chairman (soon to be ex-chairman) James Huff then butt-dialled Spaw back.

Despite the executive assistant trying to gain their attention (“Hello, hello!!!”), Huff and his colleague were oblivious, and they started to talk about replacing the chief executive – who was, of course, Carol Spaw’s boss.

The loyal Ms Spaw took notes of what was being said, and eventually began recording the call on her iPhone, as the call continued for a further 91 minutes, including a section where Huff returned to his hotel room and told his wife about the plan to fire the CEO. Of course, this was never going to end with everybody kissing and making up.

Spaw shared copies of her notes with the media and other members of the board. James Huff and his wife claimed that they had been victims of an illegal wiretap, but clearly the courts don’t agree and ruled that Spaw didn’t do anything illegal.

Here is my favourite part of Bloomberg‘s report:

This is only the second time a court case has used the phrase “butt dial,” as far as Eric Goldman, a law professor at Santa Clara University in California who directs the school’s High Tech Law Institute, knows.

I can’t wait for that question to come up next time I play Trivial Pursuit.