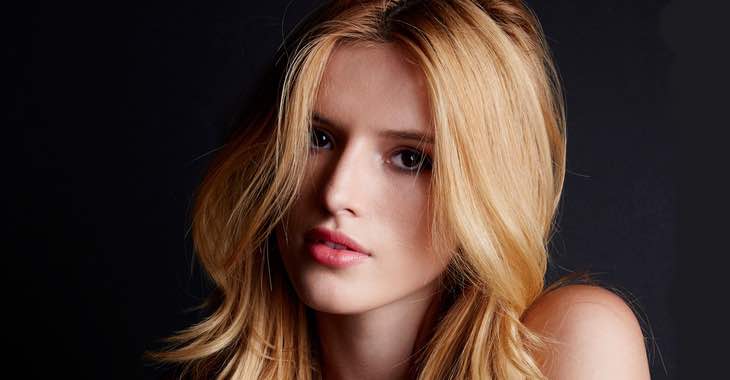 American actress Bella Thorne has taken a leaf out of Radiohead’s book, and rather than be intimidated by a hacker threatening to release stolen content – posted it up on the internet herself for anyone to access.

Problems started for Thorne when her Twitter account was hijacked on Thursday, and a number of racist tweets posted to her 6.6 million followers.

That wasn’t the end of 21-year-old Thorne’s headaches, however, as she was contacted by someone claiming to have stolen intimate images of the actress.

Thorne’s response? To publish the topless images herself on her Twitter account this weekend, alongside screenshots of messages she had received from the alleged hacker.

The screenshots include an unredacted phone number with a central Indiana area code which may or may not belong to the alleged hacker.

In a statement posted on her Twitter account, Thorne doesn’t mince her words about how angry the hacker’s actions have made her:

Yesterday as u all know all my shit was hacked For the last 24 hours I have been threatened with my own nudes I feel gross, I feel watched, I feel someone has taken something from me that I only wanted one special person to see, He has sent me multiple nude photos of other celebs, he won’t stop with me or them he will just keep going,

For too long I let a man take advantage of me over and over and I’m fucking sick of it, I’m putting this out because it’s MY DECISION NOW U DONT GET TO TAKE YET ANOTHER THING FROM ME.

I can sleep tonight better knowing I took my power back. U can’t control my life u never will.

Here’s the photos he’s been threatening me with, in other words here’s my boobies.

So here fuck u, and the last 24 hours I have been crying instead of celebrating my book while doing my book press. Oh yea, the fbi will be at your house shortly, so watch. Your. Mother. Fuckin. Back.

In an interview with Hollywood Reporter, Thorne – while still angry about what had occurred – generously showed some compassion to whoever had hacked her:

This kid sounds like he’s 17, as much as I’m so angry and wanted to fuck him up over doing this to people I just wanted to teach him a lesson,. He’s still a kid and we make mistakes, this mistake is a bad one. But I don’t want some 17-year-old’s whole life ruined because he wasn’t thinking straight and being a dumbass.

What isn’t clear is how Bella Thorne was hacked.

Was she using an easy-to-guess password? Was her password stolen through a phishing attack or keylogging malware? Was she – as so many people do – re-using the same password on multiple online accounts? Did she have two-factor authentication (2FA) in place to harden her online security? If she did have 2FA in place was it SMS-based (making it vulnerable to SIM swap attacks)? Does she have anyone in her entourage who has access to her online accounts and may not be taking security seriously enough?

Lots of questions, and no clear answers. But I hope that Bella Thorne is taking the time to look into what occurred and putting measures in place to make it far less likely that hackers will succeed in future.