You would have hoped that Facebook were being more proactive in removing horrific videos being spread on its social network, after the furore earlier this week.

Sadly, there are still grisly beheading videos being shared on Facebook, without any warning of their horrific content. 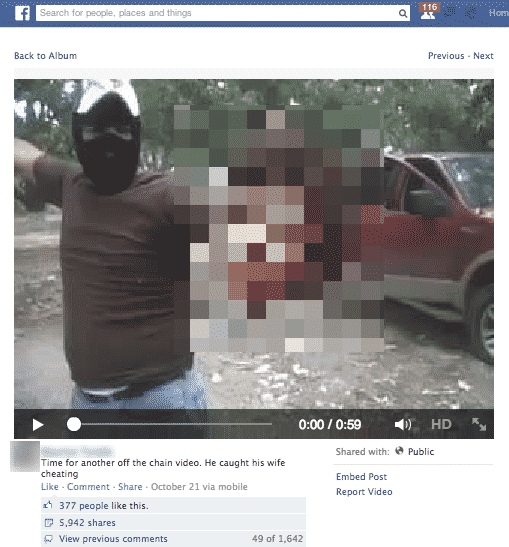 (Unlike Facebook, I have censored out the most gruesome part in my screenshot above)

Facebook user E. Harrell contacted me, after finding the gruesome and shocking video of a woman’s head being decapitated in her newsfeed.

I was shocked and disgusted to find the beheading video on my Facebook newsfeed tonight… The video bears no warnings about its graphic and violent nature in the title, the preview screen shot that appeared in my newsfeed (without having clicked “play”) showed the murderer holding the woman’s head in mid air covered in blood, and the comments were clearly celebrating, mocking, and making light of the murder.

This in no way honors their claim to “take ‘a more holistic look at the context’ of graphic content, including whether it’s been shared “responsibly” with appropriate warnings.”

Ms Harrell – a recent college graduate, who lives in the Chicago area – says that she reported the video to Facebook, and made it clear that she intended to permanently delete the account if they don’t quickly and permanently resolve the issue.

“I am absolutely horrified at the thought that children using Facebook might come across this video,” she told me.

If you can still bear to be on Facebook, and want to be kept updated with news about security and privacy risks, and tips on how to protect yourself online, join the Graham Cluley Security News Facebook page.

3 comments on “Beheading videos are *still* being spread on Facebook”