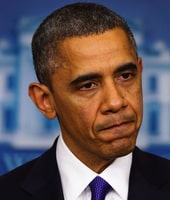 The United States government has begun a partial shutdown, after Congress failed to approve funding for government operations. It’s obviously a huge news story if you live in America, but it also has an impact on the web for the rest of the world’s surfers too.

As Netcraft reports, among those who have suffered is Barack Obama himself. His website at https://www.barackobama.com may still be up and running, but no-one has paid for his SSL certificate to be renewed. 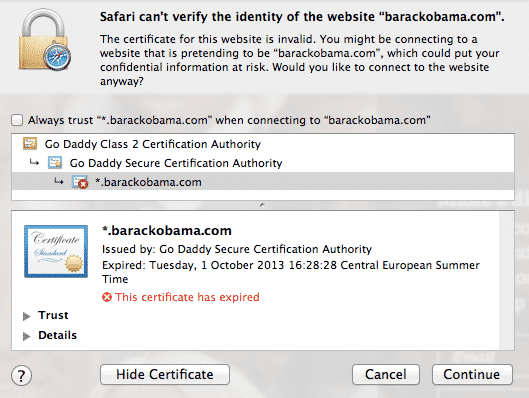 The certificate for this website is invalid. You might be connecting to a website that is pretending to be “barackobama.com”, which could put your confidential information at risk.

Of course, Barack Obama’s website has nothing to do with Federal government, so any blame pointed at the shutdown is surely mischief making.

The same cannot be said of other sites which are experiencing issues.

For instance, NIST – the National Institute of Standards and Technology – has a stark message on the front of its website at http://nist.gov/

Due to a lapse in government funding, the National Institute of Standards and Technology (NIST) is closed and most NIST and affiliated web sites are unavailable until further notice. We sincerely regret the inconvenience.

One of the NIST websites impacted is the Computer Security Resource Center (CSRC) at http://csrc.nist.gov, although services such as the National Vulnerability Database and NIST Internet Time Service websites would continue to be available.

While NASA’s 55th birthday celebrations are turning into something of a damp squib, with its site currently redirecting to a generic statement at http://notice.usa.gov 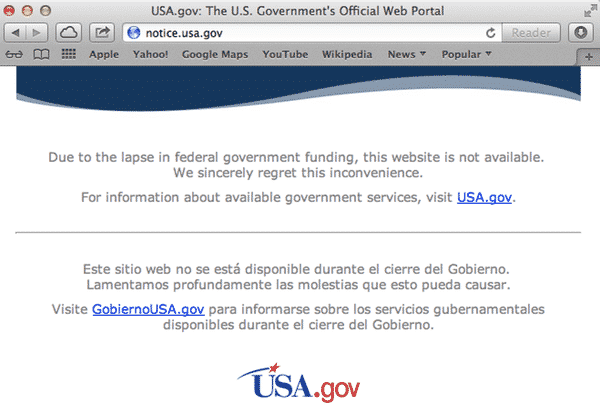 Due to the lapse in federal government funding, this website is not available.
We sincerely regret this inconvenience.

Although thousands of NASA staff are being told to stay at home and not show up at work, that advice fortunately doesn’t apply to the astronauts currently orbiting the Earth in the International Space Station. (Although they won’t be tweeting) Lets hope that any security-related work being done to harden these websites from malicious attack was not interrupted by the government shutdown, and fingers crossed that no new critical patches come out that are needed to protect them from exploits and hackers.

At least the animals at the Smithsonian’s National Zoo can relax. They no longer need to smile for their webcams.

None of our live animal cams will broadcast during the #shutdown. The cams require federal resources, primarily staff, to run and broadcast.

4 comments on “Barack Obama’s SSL certificate, NASA and NIST among those to fall as government shutdown hits sites”