Sheesh. There’s always someone trying to make a quick buck out of others’ misery isn’t there?

Online betting site has shown its true colours by sending out a tacky press release offering odds on whose name might be exposed by the overnight release of the Ashley Madison database, after the adultery website was hacked.

Here is the press release that was just sent to me by a member of Paddy Power’s PR team: 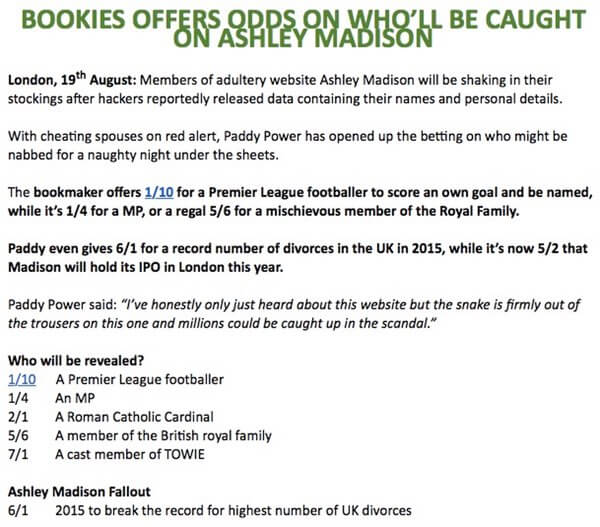 The bookmaker offers 1/10 for a Premier League footballer to score an own goal and be named, while it’s 1/4 for a MP, or a regal 5/6 for a mischievous member of the Royal Family.

Paddy even gives 6/1 for a record number of divorces in the UK in 2015, while it’s now 5/2 that Madison will hold its IPO in London this year.

That means anyone could have created an account using the email address of a top footballer, politician or – yes – member of the Royal household.

Paddy Power may be finding the situation funny, but just think of the potential human cost of a data breach like this.

We shouldn’t be too quick to jump to conclusions. Even if account details are genuine, their existence is no proof that someone had an affair behind their partner’s back.

4 comments on “Ashley Madison: Betting site offers odds on who will be exposed”