At the start of July, Microsoft proudly announced that it had reached an important milestone. 100,000 Windows 8 apps are available through its online marketplace, imaginatively titled “Windows Store”.

Thanks for a great \build! Just passed 100k apps in the Windows Store.

Of course, that’s only really a reason to celebrate if the apps are of good quality, from legitimate developers, and aren’t actually designed to con unsuspecting Windows 8 users out of their hard earned cash.

Sadly, there’s increasing evidence that the Windows Store has a worrying number of apps inside it which are designed to fleece unsuspecting users. 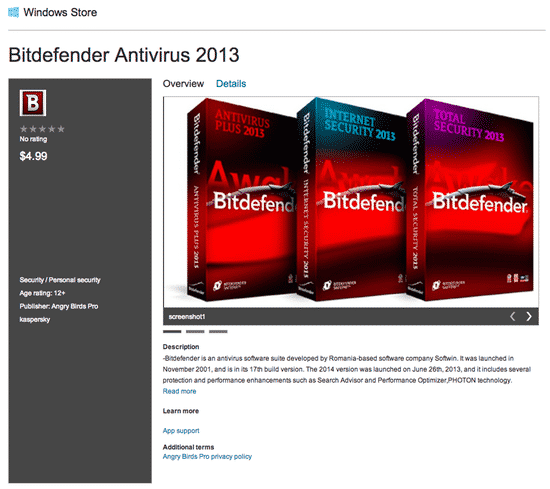 It’s not the *real* BitDefender AntiVirus 2013, of course, which is written by the Romanian software company Softwin, a respected member of the computer security industry.

No. This is “BitDefender AntiVirus 2013” as published by… Angry Birds Pro? and Kaspersky?? It looks like someone has definitely got their Eastern European anti-virus vendors mixed-up, but more than that they’re claiming that a bunch of cartooning catapulting birds have written this anti-virus software app.

If you read all the small print (which is only revealed if you click the “Read more” link) you discover that the enterprising birds are charging you $4.99 for the pleasure of receiving a tutorial of how to use BitDefender AntiVirus 2013. But it’s easy to see how many users would be entirely duped and click the purchase button without realising they weren’t going to get an anti-virus app.

Clearly, something appears to have gone seriously wrong with the app-vetting procedures one hopes that Microsoft has in place to protect the Windows Store from fraudsters and opportunists.

And BitDefender aren’t the only ones to have their brand tarnished in the Windows Store.

As WinBeta reports, there are many tutorial and “How to use” apps in the Windows Store which pilfer the icons of the real products they are spoofing in the hope of making some quick cash. 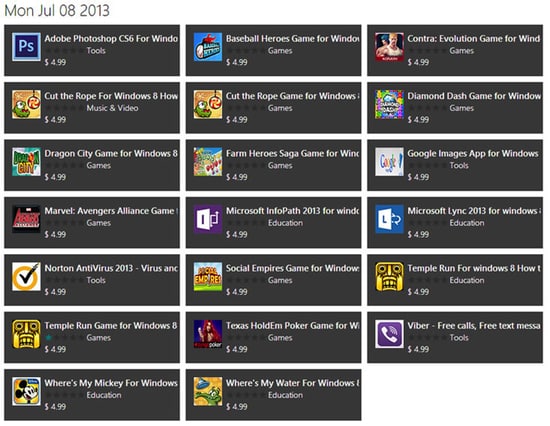 If you want to learn more about this issue, I recommend you check out the report from Ghacks.net, which has published a warning about the different techniques that are being used in the Windows Store to dupe users with deceptive apps.

3 comments on “Angry Birds write their own anti-virus. Call it BitDefender. Sell it in Windows Store. But beware…”