Accenture appears to have been hit by the LockBit ransomware gang, who are offering to sell data stolen from the global consultancy firm to interested parties.

An Accenture spokesperson told CNN Business that the firm did suffer a cybersecurity incident, but failed to confirm it was a ransomware attack.

“Through our security controls and protocols, we identified irregular activity in one of our environments. We immediately contained the matter and isolated the affected servers. We fully restored our affected systems from back up. There was no impact on Accenture’s operations, or on our clients’ systems.”

But let’s face it, it almost certainly was ransomware.

On their dark web website, the LockBit ransomware gang confirmed the breach, and has threatened to release data exfiltrated from Accenture’s systems if a ransom is not paid.

A ticking clock is counting down to the gang’s deadline. 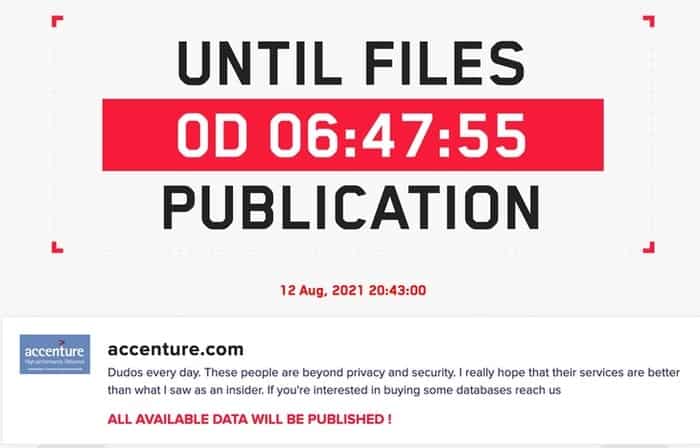 “Dudos every day. These people are beyond privacy and security. I really hope that their services are better than what I saw as an insider. If you’re interested in buying some databases, reach us.”

Initially, it was reported that the LockBit gang had published almost 2,400 files stolen from Accenture – but these were seemingly removed after a new countdown was added to the page.

Past victims of the LockBit ransomware gang include Merseyrail, the UK railway network serving Liverpool and its surroundings.