For a while today, the seventeen people who use the Yahoo search engine saw a message in big friendly purple letters telling them not to panic: 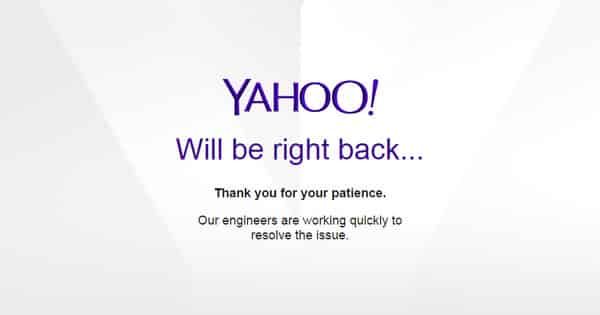 Will be right back…

Thank you for your patience.

Our engineers are working quickly to resolve the issue.

In these paranoid times, with the United States having just announced new sanctions against North Korea in connection with the country’s alleged (but wildly doubted) hacking of Sony, it would be natural for some to jump to the conclusion that cybercriminals are to blame.

Could the Yahoo downtime be due to North Korea launching a counterstrike? Or is it Lizard Squad attempting to wreak revenge after some of its alleged members were apprehended by the cops?

Sorry any of you were expecting a dramatic headline. It appears that Microsoft is to blame for Yahoo’s hiccup.

There was an outage of Microsoft’s search engine, Bing, earlier in the day – and Yahoo depends on that technology for its own search infrastructure.

It’s fair enough that you wouldn’t have noticed if Bing had gone down. After all, there are probably even less people using Bing than plonkers still clinging desperately onto their Google Glasses.

What a great reminder for all of us though, as we enter the brand new year of 2015, that often computer problems are not due to hackers, vulnerabilities or malware. It can be just a common-or-garden down-to-earth SNAFU that has caused the problem instead.

3 comments on “Yahoo search engine goes down – Microsoft, not North Korea, to blame”