The big news story around the world is that Nelson Mandela, South Africa’s first black president and figurehead of the anti-Apartheid movement, has died at the age of 95.

And where do people turn for breaking news stories these days. That’s right, Twitter.

Which is why many people are right now retweeting what appears, at first glance, to be an embarrassing goof by socialite Paris Hilton. 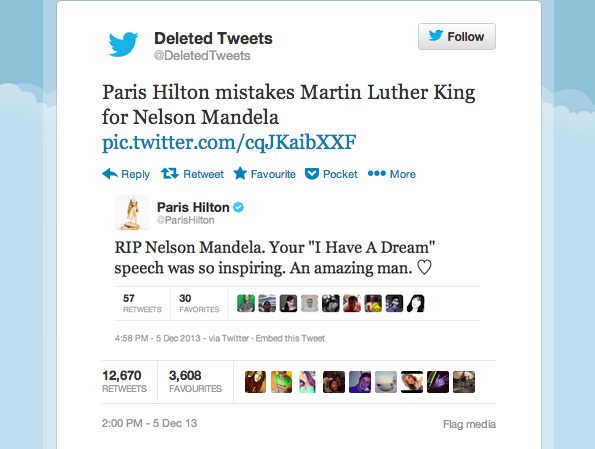 If you were to believe Twitter, you would think that Miss Hilton has tweeted the following message, exposing her ignorance:

RIP Nelson Mandela. Your “I Have A Dream” speech was so inspiring. An Amazing man. <3

Would the real Paris Hilton make the mistake of confusing Nelson Mandela with Martin Luther King? I don’t think so.

Although Hilton likes to play up the image that she is a airheaded blonde, I suspect the truth is rather different.

Indeed, I would be surprised if she’s not quite a sharp cookie. Just consider how she and her team have managed to keep her in the spotlight over the years, and how she’s amassed a huge personal fortune through product endorsements and simply showing up at other people’s parties and premieres to help them gain press attention.

So, firstly, I don’t believe that she’s that dumb. The tweet is simply designed to play on your stereotypical perception of what Paris Hilton is like.

Secondly, when the tweet began to spread around Twitter, she was actually on a plane. See the tweet she posted minutes ago announcing that her aircraft had just touched down in Miami. 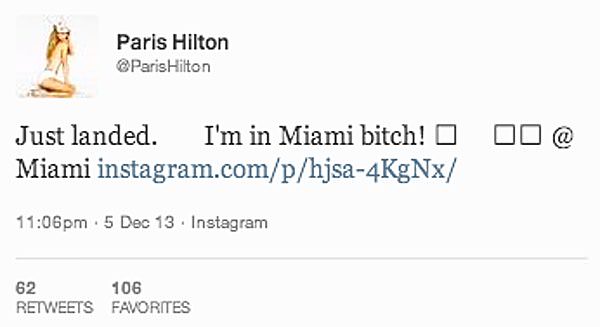 The only “evidence” that Paris ever posted the message at all, is in a picture uploaded by a Twitter account called @DeletedTweets, claiming to be a screenshot of Hilton’s alleged Twitter goof.

And, what do you know, while I’ve been writing this article, the offending @DeletedTweets tweet itself appears to have been erased.

Don’t trust everything you read on Twitter. And shame on whoever thought the death of a world statesman admired by millions was the perfect opportunity to embarrass Paris Hilton.

How very sick and sad.

Update: Paris Hilton (the real one) has now posted a message, confirming that she didn’t send the tweet confusing Martin Luther King with Mandela.

Whoever made that stupid fake tweet lacks respect to the loss the world is mourning right now. Same goes for all the blogs who ran with it.