Here’s something of a surprise.

According to Google Maps, NSA whistleblower Edward Snowden has not only come back to the United States – but he’s actually inside the White House. Take a closer look if you don’t believe me. 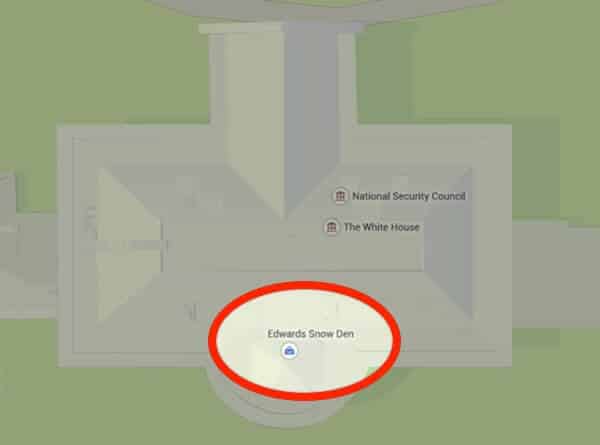 No, it’s not the case that the US administration has softened its opinion of Edward Snowden following the hilarious interview he made earlier this month with John Oliver.

Instead, as SearchEngineLand reports, security consultant Bryan Seely used a known weakness in the way that Google verifies business locations:

You create a business in Google Maps at an address where you can receive mail and with a phone number you can receive calls to. You get Google to send you a verification postcard to the address. Once the business is verified, you delete it from your account. Then you use another Google account to claim this now orphaned business. You gain control over it by doing verification via phone. Once that’s happened, you’re free to move the business to anywhere you want, change the name and alter other details.

That’s how “Edward’s Snow Den” ended up in the White House with a Seattle-area phone number. The temporary number that Seely used couldn’t be changed — but everything else could.

Seely has previously created fake listings for the Secret Service and FBI and told Google about the loopholes that he has uncovered. But it seems he’s still finding ways to game the system.

That doesn’t impress Seely, as it’s easy to imagine how Google Maps could be abused by location squatters.

“It’s disheartening. It’s like finding out your favorite company is a piece of sh**.”

Google has since removed “Edwards Snow Den” (apparently a snowboarding shop) from 1600 Pennsylvania Avenue on Google Maps, but its business entry on Google Plus is still online.

You can read more in the article on SearchEngineLand.